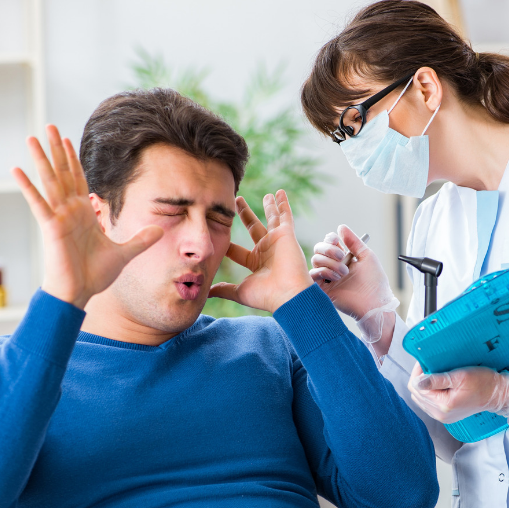 Can an ear infection cause Tinnitus?

Fans of the NBC sitcom The Office may remember one of Jim and Pam’s famous pranks, where they softly hummed the same note (but denied hearing anything themselves) until their co-worker Dwight decided he needed to make an appointment with an ear doctor. They called it “pretendinnitus,” based off of a very real ear problem: Tinnitus.  In this blog post, we look at this annoying ear problem and its connection to ear infections.

Tinnitus involves a perception of noise in the ears. Most people describe what they hear as a ringing, but it can also manifest as hissing, humming, buzzing, or clicking. Tinnitus is a relatively common issue, affecting around 1 in 5 people.

The noise can be steady or intermittent, and it can also vary in intensity, ranging from slightly annoying to overwhelming, making it difficult to hear external sounds or concentrate. Most often Tinnitus is subjective, meaning only the person suffering from it can perceive the sound. Subjective Tinnitus is sometimes caused by problems with the auditory nerves or the interpretation of nerve signals in the brain. More commonly it is caused by outer, middle, or inner ear problems. Some people suffer from a stronger objective Tinnitus, however, where the sound is intense enough for a doctor to hear during examination. Objective Tinnitus can be caused by muscle contractions, blood vessel issues, or a bone condition in the middle ear.

Causes and severity of Tinnitus

Tinnitus is not a condition itself, rather a sign of some other underlying condition. We have explored some of the common causes in an earlier post. Most often Tinnitus comes from hearing loss due to age or prolonged exposure to loud noises: standing too close to the speakers at a concert with no ear plugs, operating heavy construction equipment (again, with no ear plugs), or working in/near other loud machinery (without…you know the drill). Tinnitus can accompany virtually every type of hearing loss, but it can also indicate a number of other underlying conditions, such as:

Tinnitus may remain a relatively mild nuisance for most patients, however for some it can cause real damage to their quality of life. The persistent ringing can cause sleep problems and increase stress, which can then spiral into fatigue, memory problems, anxiety, and difficulty concentrating. The American Tinnitus Association notes that in some cases Tinnitus can be severe enough to impact a person’s everyday life, even leading to social isolation or an inability to work.

An infection of the outer ear (aka otitis externa, aka swimmer’s ear) is typically caused by bacteria growth brought on by the presence of excess moisture in the ear or an abrasion to the lining of the ear canal. The excess moisture that causes swimmer’s ear can come from the pool, baths and showers, or the infection can even grow out of an aggressive cotton swab. This type of infection is much more common in adults.

Infections of the outer and middle ear can both cause Tinnitus. Ear infections will often involve swelling or fluid that can cause enough of a blockage to damage the eardrum and bring on that annoying ringing (or buzzing or hissing).

Tinnitus can improve by identifying and treating the underlying condition. When it comes to ear infections as the culprit, treatment will usually consist of monitoring symptoms to determine if the infection becomes severe enough to warrant antibiotics. But most ear infections will clear up within a few days, and the Tinnitus along with them. Ear drops and over-the-counter pain medication may also be incorporated, and for an outer ear infection, treatment will also include a thorough cleaning.

The potential for developing Tinnitus highlights the importance of keeping an eye on ear infection symptoms. Most will clear up on their own, but as we’ve seen before, monitoring ear infections remains critical, in case yours becomes one of the rare cases that develops into something more serious. We saw that left untreated, ear infections can cause hearing loss, damage to the eardrum, or even more extensive harm if the infection spreads beyond the ear. Tinnitus might just be a helpful clue to flag infections that are not clearing up.

So rather than an annoyance, think of that ringing as a helpful warning system, listen to your ears, and check with your doctor to keep ear infections under control.