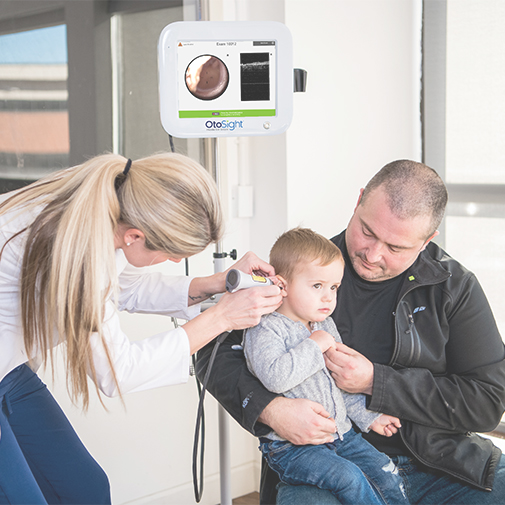 RESEARCH TRIANGLE PARK – If your child has ever suffered from a painful earache, and that includes most parents, you’ll be delighted to hear about PhotoniCare.

The Champaign, Illinois startup recently expanded to North Carolina, where it has set up shop at the North Carolina Biotechnology Center’s Landing Pad.

PhotoniCare has received U.S. Food and Drug Administration clearance to market its OtoSight Middle Ear Scope. OtoSight is a patented hand-held device that uses near-infrared light waves (optical coherence tomography, or OCT) to provide a uniquely important view of the tissue of the middle ear behind the eardrum.

The device allows medical practitioners to more-accurately determine the presence or absence of fluid in the middle ear and visualize the type of fluid causing the ear infections that plague more than 80% of children. These infections are a leading cause of hearing loss, surgery and antibiotic use.The problem also affects adults. — PhotoniCare images

PhotoniCare is in business because the company founders and funders are convinced OtoSight is a significant technological improvement over the standard otoscope – the current “best-practice” diagnostic tool for middle-ear problems that has remained largely unchanged for 150 years.

The otoscope only delivers a surface view of the eardrum. So healthcare providers must either try to determine the likely cause of a child’s earache with limited information, or use more-invasive surgery to fully diagnose the problem.

In an interview with NCBiotech, PhotoniCare executives said the traditional otoscope can misdiagnose as many as half of middle-ear infections. Misdiagnosis can lead to unnecessary surgery, as well as over-prescription of antibiotics that can enable the development of antibiotic-resistant bacteria – a growing global problem. It also can mean that some of those who need surgical intervention to correct ear infections don’t get it as soon as they should.

Children can suffer from recurring ear infections for as long as a year, taking increasingly potent antibiotics, before they are referred to an ear, nose and throat specialist. The end result is often the insertion of tympanostomy tubes to prevent the accumulation of fluids behind the eardrum. About a million of these surgeries are performed each year in the U.S. alone.

“At PhotoniCare we set out to solve the massive problem of frequent misdiagnosis of middle-ear infections and the resulting overuse of antibiotics and surgical referrals in children,” said the company’s co-founder and CEO Ryan Shelton, Ph.D.

He knows the landscape well. PhotoniCare exists because Shelton’s now-9-year-old son had 10 significant events involving ear infection in his first year of life. To Shelton, it’s not just a business opportunity – it’s a passion. And it’s driven by a recognition that he can help bring together a team of smart people to address a problem his family experienced and provide a solution that extends far beyond them.

OTOSIGHT TAKES THE GUESSWORK OUT OF DIAGNOSING EAR INFECTIONS

Shelton explained that the OtoSight Middle Ear Scope takes the guesswork out of diagnosing fluid buildup in the middle ear that causes infection .OtoSight technology has shown in clinical studies to be more than 90% accurate in detecting the presence or absence of fluid, even when significant cerumen – the technical term for earwax – might otherwise get in the way, he added.

OtoSight is based on OCT technology that is the current gold standard in  ophthalmology for examining the retina in the eye. But, unlike the large desktop system you may now encounter during a retinal eye exam, the OtoSight houses the same powerful capability in a much smaller hand-held package.

The FDA cleared OtoSight for non-invasive imaging of the middle ear under its 510(k) protocol, which is designed for devices that have been proven to be safe and effective and are substantially equivalent to legally marketed diagnostic tools.

PhotoniCare received more than $6 million in support from the National Institutes of Health, including a recent $2.2 million Phase 2 Small Business Innovation Research grant to advance the company’s artificial intelligence and machine learning programs.

PhotoniCare Chief Commercial Officer Jeff Hydar said the company initially identified specific regions in the U.S. – including North Carolina – to market OtoSight under its “Trailblazer” early adaptor program. It also has a distributor partnership in Japan. And PhotoniCare has piloted a program in Australia with the aboriginal population, which has one the world’s highest rates of middle-ear infections in children.

The product is targeted at frontline care – specifically pediatricians, urgent-care and family practice physicians – a medical universe that will expand to emergency rooms and other healthcare providers in the future. The company currently is focused on the “Trailblazer” program that provides clinics with an exclusive first use of the technology. Hydar said the company plans a full product launch before the end of this year.

The reaction from doctors has been “extremely enthusiastic so far,” Hydar pointed out. “Physicians not only are delighted about the new technology, they’re also glad to have a tool that can help them better evaluate antibiotic use.”

Although PhotoniCare’s current focus is on promoting the value of OtoSight and getting the device into the hands of physicians, the company believes the technology can be further developed to screen a variety of other health issues in mammalian tissues. They range from diabetic retinopathy and macular degeneration to melanoma, oral cancer, cavities and even the pulp integrity in teeth. So PhotoniCare plans to expand its research and reach in the future.

The company was founded in 2013 in the academic lab of co-founder Stephen Boppart, M.D., Ph.D., Abel Bliss Professor of Engineering at the University of Illinois at Urbana-Champaign in Illinois. In 2015,Shelton and co-founder Ryan Nolan, now PhotoniCare vice president of clinical operations, left the lab to commercialize the patented technology.

Shelton said that, while the Champaign area has been an excellent place to shepherd the technology to its current state, the company recently decided to relocate to North Carolina. The Tar Heel state won out over several other areas of the country – including Austin, Texas. He said the team’s goal was to take advantage of North Carolina’s high-tech labor pool, vibrant healthcare community, and the favorable balance between the amenities of a large metropolitan area and an excellent quality of life.

PhotoniCare’s four North Carolina-based employees currently operate out of NCBiotech’s Landing Pad, which provides office space to life sciences companies that are establishing a presence in the state.

Shelton said he expects the company to grow to more than two dozen employees over the next several years. Its mission is “to improve clinical outcomes and serve unmet patient and provider needs by translating novel light-based technologies into objective medical practice.” The PhotoniCare leadership team, marketing and R&D will be located in the Research Triangle area.

NCBiotech has been instrumental in getting PhotoniCare established in the state, according to Nishant Mohan, Ph.D., the company’s chief technology and product officer.

“We’ve received fantastic support, ” he said. “NCBiotech has provided us with a number of resources and contacts, along with office space and support so we didn’t have to go through the process of setting all of that up ourselves. Our transition would have been much harder without their help.”