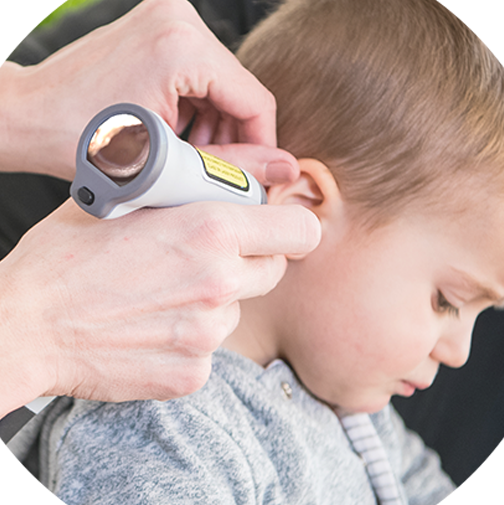 Despite its small size, the ear is a very complicated organ. The three main parts of the ear are known as the inner, middle, and outer ear. The #EnginEarGuys focus their research and work on the middle ear. The middle ear is the area located directly behind the eardrum.

The Middle Ear
Most middle ear infections are caused by either bacteria or viruses. A common cold, the flu, or allergy symptoms that cause congestion and swelling of the nasal passages, throat, and eustachian tubes can sometimes lead to an infection. Anything that makes the nose stuffy has a tendency to cause swelling and blockage of the eustachian tubes. Swelling from colds or allergies can keep the eustachian tubes from opening and this leads to pressure changes and the accumulation of fluid in the middle ear. This pressure and fluid will cause pain and sometimes persistent fluid can lead to an infection.

Viewing the Surface of the Eardrum
Traditionally, when a healthcare provider checks you or your child for an ear infection, they use an instrument called an otoscope. An otoscope is basically a pen light attached to a magnifying glass, and this simple device has been used in medicine for the past 150 years. The otoscope comes with several pointed tips called specula. A speculum is chosen based on the size of the patient’s ear opening. To use the otoscope, a healthcare provider gently inserts the appropriately sized speculum into the ear canal to look at the surface of the eardrum.

The otoscope allows the healthcare provider to only look at the surface of the eardrum. Because they can only see the surface, the healthcare provider often has no choice but to make a subjective diagnosis based largely on the appearance of the eardrum. Additionally, there may be wax blocking his/her view, or the patient may be uncooperative (think tired and sick child), which prevents proper positioning of the otoscope. These real-life impediments are what makes diagnosing AOM so difficult. Affecting more than 80% of children, ear infections are misdiagnosed up to 50% of the time using the otoscope.[i] Improvements in technology, like the TOMi™ Scope [OtoSight Middle Ear Scope], aim to bring clarity to this very subjective process of assessing middle ear health..

A New View of the Middle Ear
In the search for a solution, there has never been a method to non-invasively ascertain the contents of the middle ear, a key determinant when considering an infection diagnosis such as Acute Otitis Media (AOM) – until now!

On the right is the view of the middle ear using the TOMi Scope [OtoSight Middle Ear Scope]. The white ribbon-shape represents your eardrum, or tympanic membrane, in depth. Above that ribbon is the ear canal and below that ribbon is the middle ear. In this image, black means air, which is what we want to see both inside and outside of the eardrum. In the example to the right, the signal above and below the TM is the same (black), which means there is no middle ear effusion (MEE).

You can see additional examples of ears with no fluid in the series of images below.

If the signal immediately above and below the TM is different, then we know there is fluid present in the middle ear fluid. And, the brighter and denser that signal is, the more gunk, such as cellular debris from infection, is expected to be found in that fluid. This is shown in the series of images below.

Have questions for the #EnginEarGuys? Send your questions here and be sure to subscribe here for company updates and news on the TOMi Scope [OtoSight Middle Ear Scope]!